5 Takeaways from Earning Links in 130 Countries

Posted on: December 1, 2016 by Local SEO Nerd in Local SEO Strategies
No Comments

I was in Peru earlier this year for a digital marketing conference, and I overwhelmingly heard the same frustration: “It’s really hard to use outreach to earn links or PR coverage in our country.”

This wasn’t for lack of trying. As I continued to hear this sentiment during my visit, I learned there simply weren’t a lot of opportunities. For one thing, in Peru, there aren’t nearly as many publishers as in more populous countries. Most publishers expected payment for mentioning a brand. Furthermore, journalists did a lot of job-hopping, so maintaining relationships was difficult.

This is a conundrum not limited to Peru. I know many people outside of the US can relate. When you see the Fractl team and others sharing stories about how we earn hundreds of links for a single content piece, you might think it must be nice to do outreach somewhere like the US where online publishers are plentiful and they’ll feature great content with no strings attached. While the work my team does isn’t easy by any means, I do recognize that there are ample opportunities for earning links and press coverage from American publishers.

What can you do if opportunities are scarce in your country?

One solution is focusing your outreach efforts on publishers in neighboring countries or countries with the same language and a similar culture. During conversations with the Attachmedia team (the company hosting the conference I was at), I learned they had much greater success earning media stories and building links outside of Peru because publishers in surrounding South American countries were more receptive to their email pitches and publishing third-party content.

But you may not need to do any international outreach if you know how to create the type of content that will organically attract attention beyond your borders.

1. Domestic success was a key factor in driving international placements for Fractl’s campaigns.

For years, we’ve noticed that if content gets enough attention in the US, it will organically begin to receive international press and links. Watch how this happens in the GIF below, which visualizes how one of our campaigns spread globally after reaching critical mass in the US:

Our study confirmed that there’s a correlation between earning a high number of links domestically and earning international links.

When we looked at our 50 most successful client campaigns that have earned the highest number of media stories, we discovered that these campaigns also received the most international coverage. Out of the 4,000 international placements we analyzed, 70 percent of them came from these 50 top-performing campaigns.

Maps showing a contrast between countries were the visualizations of choice for international publishers. 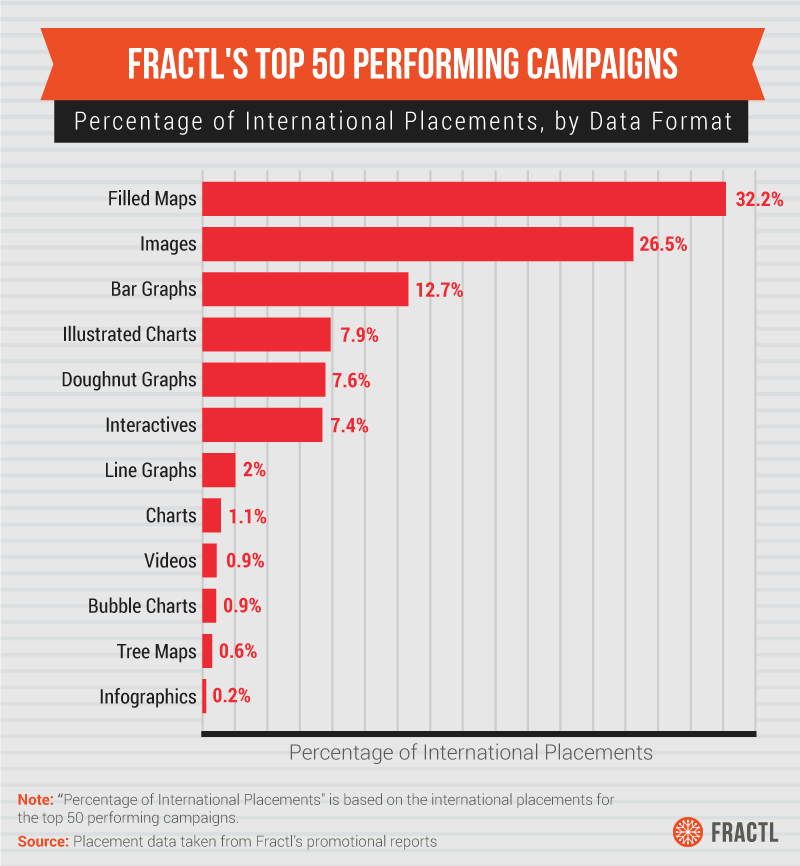 World maps can be easily understood by global audiences, and make it easy for publishers to find an angle to cover. A client campaign, which looked at how much people eat and drink around the world, included maps highlighting differences between the countries. This was our fourth-highest-performing campaign in terms of international coverage. 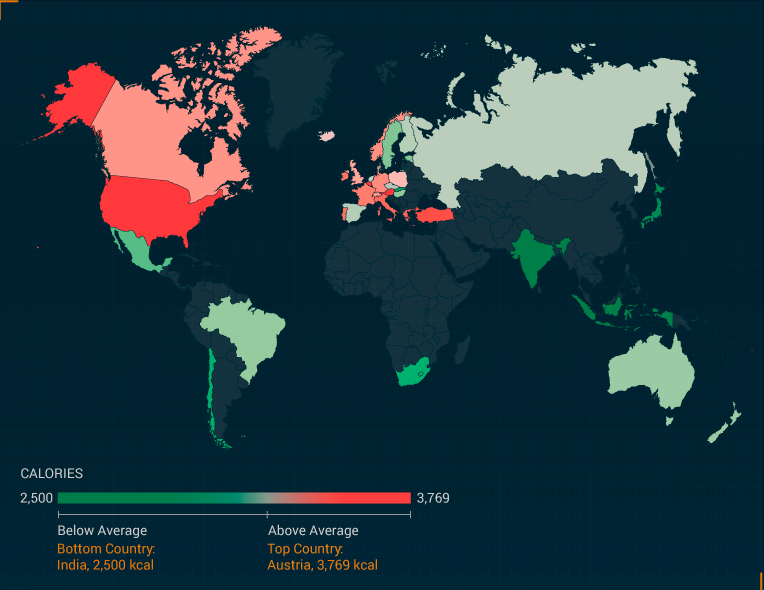 It’s easy for a writer whose primary language isn’t English to look at a shaded map like the one above and pick out the story about his or her country. For example, a Belgian publisher who covered the consumption campaign used a headline that roughly translated to “Belgians eat more calories than Americans”: 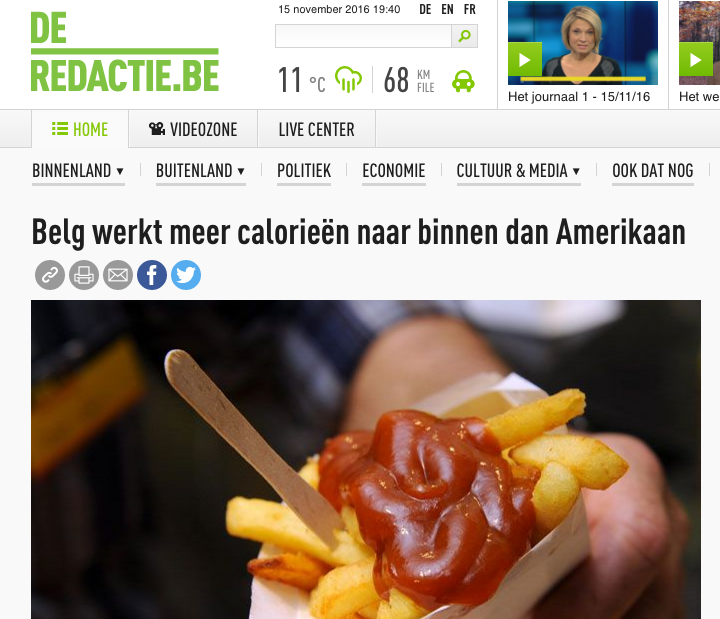 Images were the second most popular visual format, which tells us that a picture may be worth a thousand words in any language. One great example of this is our “Evolution of Miss Universe” campaign, where we created a series of animated and interactive visualizations using photos of Miss Universe winners since 1952:

The simplicity of the visuals made this content accessible to all viewers regardless of the language they spoke. Paired with the international angle, this helped the campaign gain more than 40 pickups from global sites.

As we move down the rankings, formats that relied on more text, such as infographics, were less popular internationally. No doubt this is because international audiences can’t connect with content they can’t understand.

When creating text-heavy visualizations, consider if someone who speaks a different language can understand it — would it still make sense if you removed all the text?

Pro tip: If your outreach strategy is targeting multiple countries or a country where more than one language is widely spoken, it may be worth the effort to produce text-heavy visuals in multiple languages.

Bear in the mind that these topics are reflective of our client campaigns, so every topic imaginable was not included in this study.

We drilled this down a little more and looked at the specific topics covered in our top 50 campaigns. You’ll notice many of the most popular topics would make your grandma blush. 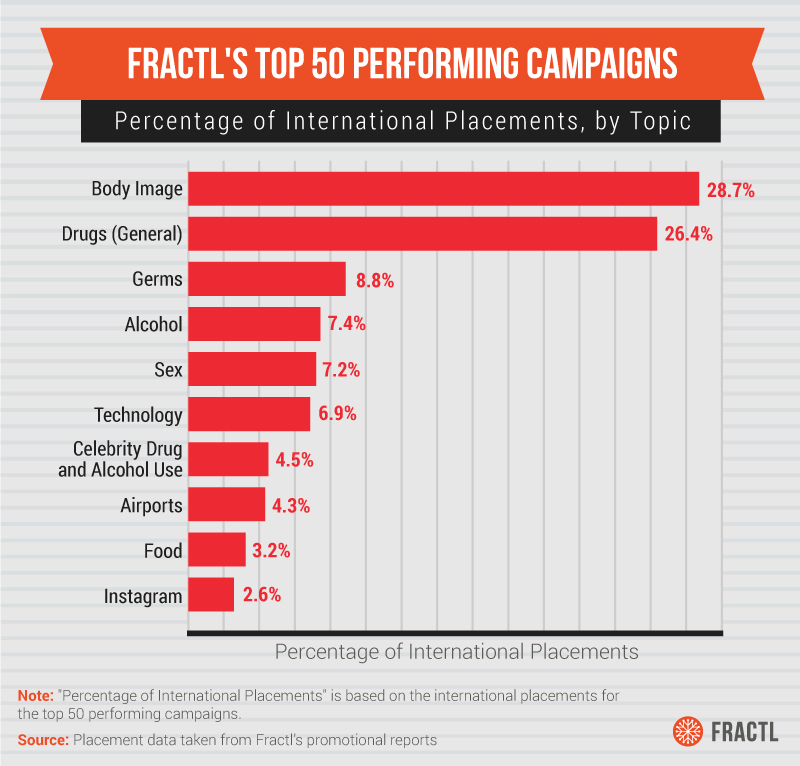 We know that controversial topics are highly effective in grabbing attention, and the list above confirms that pushing boundaries works on a global scale. (We weren’t exactly surprised that a campaign called “Does Size Matter?” resonated internationally.)

But don’t look at the chart above and assume that you need to make your content about sex, drugs, and rock and roll if you want to gain international attention. As you can see, even pedestrian fare performed well globally. Consider how you can create content that speaks to basic human interests, like technology, food, and … Instagram.

Some examples of non-geographic ideas that performed well are:

We also found that US-centric campaigns were, unsurprisingly, less likely to succeed. Only three of our campaigns with America-focused titles received more than 25 international placements. If your content topic does have a geographic angle, make sure to broaden it to have a multi-national or worldwide focus.

Pro tip: Consider how you can add an international twist to content ideas that already performed well domestically. The Miss Universe campaign example I shared above? That came to fruition after we successfully did a similar campaign about Miss America. Similarly, we could likely reboot our “Tolerance in America” campaign to look at racism around the world and expect it to be successful, as this topic already proved popular at home and is certainly relevant worldwide.

Over the years, we’ve seen time and time again that including certain elements in content greatly increases the chance of success. All of our content that achieved international success included some combination of the following:

Look back at the content examples I shared in this post, and make note of how many of the characteristics above are present in each one. To increase the likelihood that your content appeals to global audiences, be sure to read this post about the vital role these elements play in creating content that earns a lot of links and social shares.

What has your experience been like using content to attract international press and links? I’d love to hear what’s worked for you — leave a comment below!