All Content is Not Created Equal: Comparing Results Across 15 Verticals

Posted on: October 19, 2016 by Local SEO Nerd in Local SEO Strategies
No Comments

Are you holding your content marketing to unrealistic standards?

No matter how informative your infographic about tax law may be, it’s not going to attract the same amount of attention as a BuzzFeed Tasty video. You shouldn’t expect it to. In order to determine what successful content looks like for your brand, you first need to have realistic expectations for what content can achieve in your particular niche.

Our analysis of hundreds of Fractl content marketing campaigns looked at the factors which have worked for our content across all topics. Now we’ve dived a little deeper into this data to develop a better understanding of what to expect from content in different verticals.

What follows is based on data we’ve collected over the years while working with clients in these industries. Keep in mind these aren’t definitive industry benchmarks – your mileage may vary.

First, we categorized our sample of over 340 Fractl client campaigns into one of 15 different verticals:

We then looked at placements and social media shares for each project. We also analyzed content characteristics like visual asset type and formatting. A “placement” refers to any time a publisher wrote about the campaign. Regarding links, a placement could mean a dofollow, cocitation, nofollow, or text attribution. 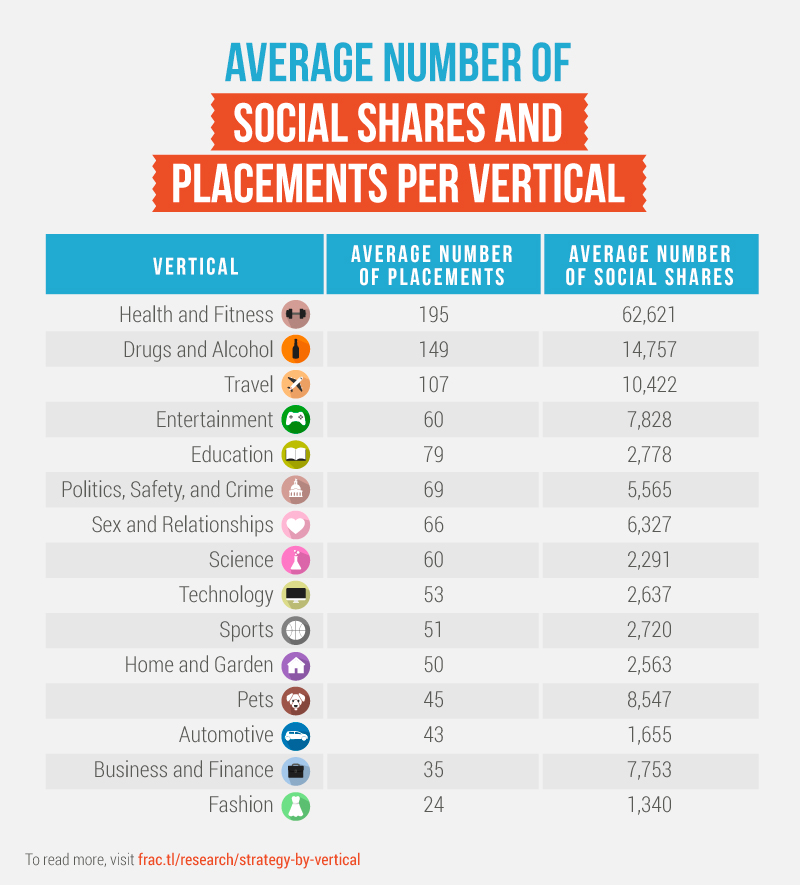 Some verticals, such as Health and Fitness, outperformed the average benchmarks by more than double, with 195 average placements and roughly 62,600 social shares. Not surprisingly, verticals with more niche audiences had lower numbers. For example, Automotive campaigns earned an average of 43 placements and 1,650 social shares.

What were the top-performing topics?

Our Health and Fitness campaigns were nearly nine times more likely to include side-by-side images than the average vertical.

Many of these side-by-side image campaigns were centered around body image issues. For instance, we Photoshopped women in video games to have body types closer to that of the average American woman. We also used this tactic to highlight male body image issues and differences in beauty standards around the world.

Takeaway: Contrasting images immediately pass along a wealth of information that can be difficult to capture as effectively with standard data visualizations like charts or graphs. Additionally, they carry emotional power.

For instance, we created a morphing GIF of Miss America from 1922 to 2015. The difference between Miss America in 1922 and Miss America in 2015 is stark, and the GIF makes a powerful statement. Readers and publishers were also able to access information about the images that wouldn’t have come across in figures alone (such as the change in clothing styles and the relative lack of diverse contestants). 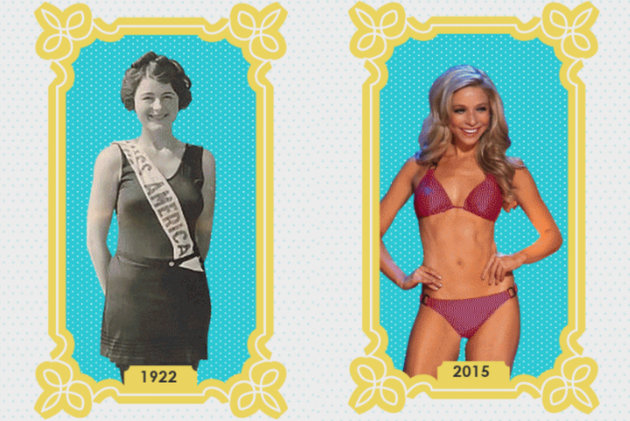 As part of the project, we also charted the decline in BMI for pageant winners. Depending on the project and available information, it may be helpful to provide some quantitative data to support the narrative told through images.

Takeaway: When dealing with emotional and controversial topics like drugs and alcohol, you don’t necessarily need to collect new data to make an impact. Readers and publishers value visualizations that can help explain complex information in simple ways. An additional benefit: creating interactive experiences that allow your audience to explore data on their own and make their own conclusions.

One good example of these principles is our “Pathways to Addiction” campaign, in which we created interactive platforms for exploring data from the National Survey on Drug Use and Health, including information about the sequence in which people have tried different substances. 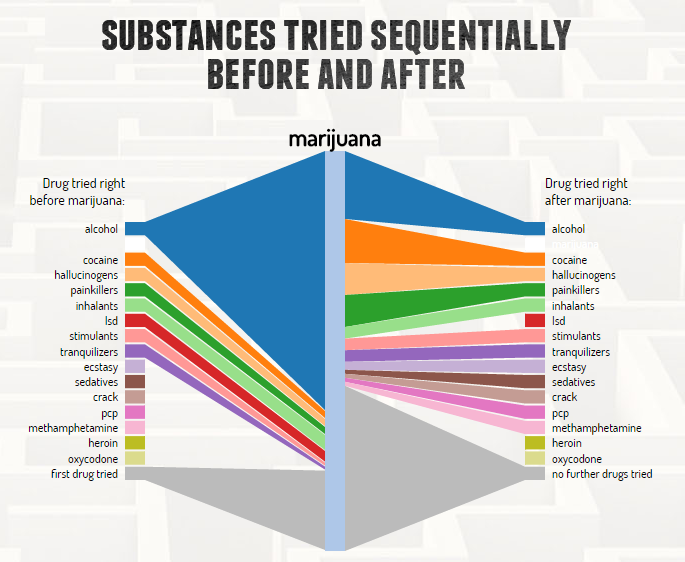 This format allowed readers to explore a controversial topic on their own and draw independent conclusions.

Pro Tip: Whether you choose to use curated data or collect your own data, it is imperative to be impartial in your presentation and open in your methodology when working on campaigns around sensitive or controversial topics. You don’t need to stay away from controversial topics, but you do need to take precautions for your agency and your client.

Takeaway: Travel is an inherently social behavior. For many people, travel isn’t complete until they’ve captured the perfect photo – or five. Travel content that acknowledges this social aspect can be really powerful. Rankings, which also feature heavily in travel content, are strong geographic egobait for readers and publishers and play up the social aspect of the Travel vertical.

Stratos Jet Charters’ Talking Tourists, which combined social media data with rankings, is a great example. For this campaign, we gathered over 37,000 tweets to determine which places were the most and least friendly to tourists. 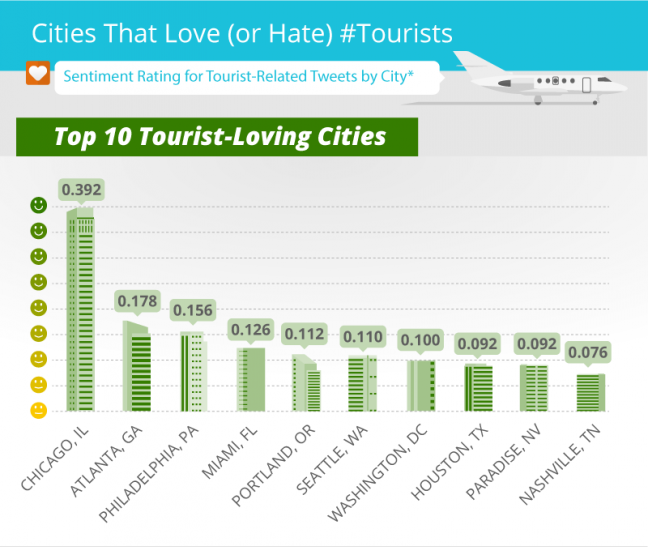 Talking Tourists was successful (96 placements and over 56,000 social shares) because it used content types with proven success in the travel vertical (social media data, rankings, and maps) to explore a topic that isn’t often explored quantitatively.

How to achieve content marketing success in every vertical

The three industries listed above are ripe for highly successful content, but does that mean less popular verticals should go in with low expectations?

Even with topics that are more difficult to attract the attention of readers and publishers, it is still possible for your content to perform well beyond other content in the vertical. This is particularly true when campaigns align with trending stories or tell a completely unique story.

However, not every piece of content can hit it out of the park. Rand estimates that it will take five to ten attempts to create a piece of successful content. Even then, the average high-performing Science content will not receive the same amount of attention as the average Health and Fitness content.

So how can you maximize the chances for success? Here’s what we’ve observed about our top-performing campaigns in the following verticals:

Browse through the flipbook below to see examples of top-performing campaigns in each vertical.

For many of our clients at Fractl, we create content both within and outside of the client’s vertical to maximize reach. Our work with Movoto, a real estate research site, illustrates how one company’s content marketing can span multiple verticals while still remaining highly relevant to the company’s core business.

When developing a content marketing strategy, it is helpful to look at the average placement and social share rate for various verticals. Let’s say a brand that sells decor for log cabins wants to focus 60 percent of its energy on creating highly targeted, niche-specific projects and 40 percent on content designed to raise general awareness about its brand.

Three out of every five campaigns produced for this client should be geared toward publishers who write about log cabins and readers who are on the verge of purchasing log cabin decor. This type of content might include targeted blog posts, industry-specific research, and product comparisons that would appeal to folks at the bottom of the sales funnel.

For the other two campaigns, it’s important to look at adjacent verticals before determining how to move forward. For this particular client, primarily creating Travel content (which yields high average social shares and placements) may be the best course of action.

In addition to the data I’ve shared here, I encourage you to analyze your own content performance data by vertical to set realistic expectations. Vertical-specific metrics can also help identify opportunities to create cross-vertical content for greater traction.