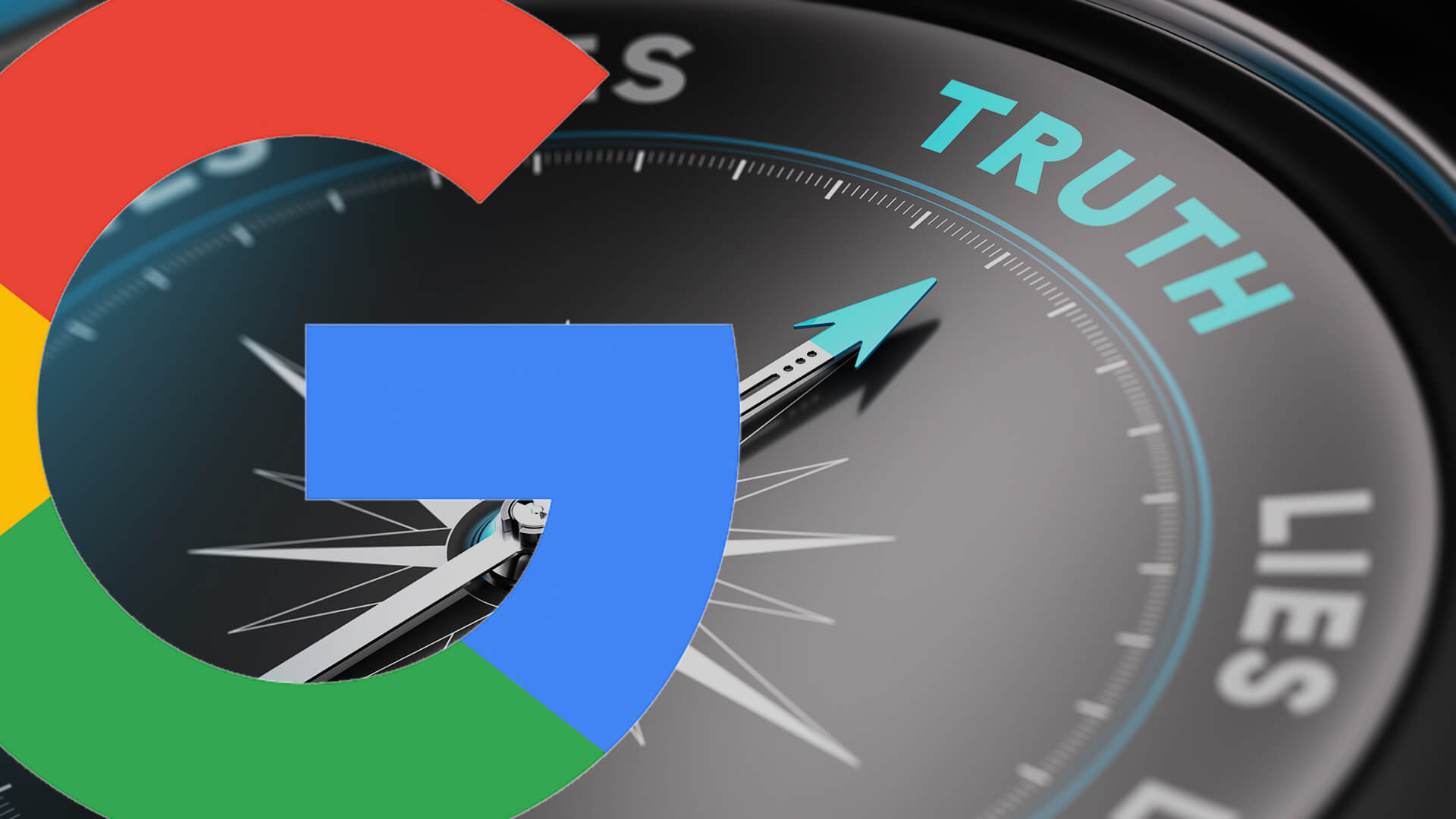 Several days after Google put a search ranking change into place, the first page of results for “did the holocaust happen” now appears to be entirely free of denial sites.

The algorithm change happened earlier this week. As we covered, it caused the Stormfront denial site that was ranking tops for that search to slip to the second spot, bumped behind the authoritative US Holocaust Memorial Museum site. Now Stormfront is entirely gone while USHMM remains:

Stormfront has not been banned from Google. It still has listings in the search engine (as is the case at Microsoft’s Bing search engine). It’s just no longer in the top results for this query. It does appear about midway down on the second page of results.

By the way, these are the results I see when logged out of Google and using “incognito” mode in Chrome, as to avoid any search history influencing them. I see this on both desktop and on my iPad. Using my iPhone, going through my mobile provider and using private mode in Safari, I see slightly different results but ones that still omit Stormfront.

These are signs that the results aren’t just unique to me. However, they could vary for other people, especially for those outside the US.

The fix that didn’t fully work

Right after the change, Google’s results were inconsistent. Stormfront occasionally would return to the top spot. Often, it was in number two spot, bumped only because our own story on the situation pushed it down. As often as not, the USHMM site was showing up behind Stormfront. It’s not what would be expected, if Google’s fix was working as promised. As I tweeted on Thursday:

I mean, my own article tends to be first now, but that’s not how the fix was supposed to work. A long-term authority site should be there. https://t.co/7OtoEk7O2p

Debate over whether the fix is real

The failure for the promised fix to stick several days after Google confirmed it suggested that it wasn’t actually real. Indeed, our own news editor Barry Schwartz wrote on his personal Search Engine Roundtable blog that he didn’t feel like there was a change, something that the Guardian picked up on. It quoted him saying that it seemed like a Google PR stunt:

Barry Schwartz, the founder of Search Engine Roundtable, a long-standing industry site, said: “There is no evidence of any change to the algorithm. We track these things very carefully and there’s nothing to suggest they have done anything.”

When asked why he thought Google had made the announcement at this time, he said: “It just seems like it must be a PR thing. That’s the only explanation I can see.”

I have immense respect for Barry, but no, I don’t think it was just a PR stunt. And yes, there are other explanations. Nor will my view be a surprise to him, as we had our own discussion internally earlier this week in a Slack thread. I’ll repost my view that I gave to him:

This is absolutely not because there’s just new news articles going in. I’ve been looking at this query for over a week now. The core sites in it fluctuate, sometimes radically and by platform. And that wasn’t the case before. Moreover, there’s absolutely no reason for them to play a PR game here. They already said they weren’t going to change it quickly. So why on earth claim to do something they didn’t actually do on the back of normal fluctuations? That just leaves them vulnerable for all the other yet-to-be-discovered queries. I do think they’ve done something. It’s just pretty weak.

What they’re not doing, in my opinion, is just saying they fixed something because the natural flux of listings for this search have changed. It would be a stupid thing to do after they largely bought time for themselves by saying they wanted to solve the issue but wanted to do it in a comprehensive manner that works for a wide variety of searches, something that would take time.

Claiming a fix when there isn’t one just makes the PR issue worse, especially when the Guardian reporter who first brought attention to the issue, Carole Cadwalladr, isn’t going to stop the pressure if this particular search changes. She (and others) are going to keep looking at range of problematic search results, such as one she tweeted earlier this week:

As it turns out, the results for that “are black people smart” search — one featured in a BBC story earlier this week — has also changed. The boxed “featured snippet” answer has gone, something that was probably a manual fix rather than because of an algorithm change. But the site that was featured would have still appeared in an unboxed number one spot, even with manual intervention. It’s also gone, showing up now on the second page of results for me.

In short, I don’t think Google’s lying about having put a fix into place. I see enough signs that something really has happened. I just think it’s a fairly weak fix, because it was one that was rushed. I expect we’ll see it improve as the days and weeks progress. I also think we’re going to see it fail to help for a wide variety of other searches that are problematic because it’s difficult to solve for every fairly infrequent search, as I’ve explained before.

I mean — are white people inbred? That’s certainly what Google will tell you in a boxed, featured answer:

This is not the answer you’d expect from Google if it was, as so many news reports have now said, skewed toward supporting some strange alt-right or right-wing or anti-minority view of the world. It’s also not the site you’d expect to be in the top two answers if Bing were perfect, which is the impression you can also get reading some articles: 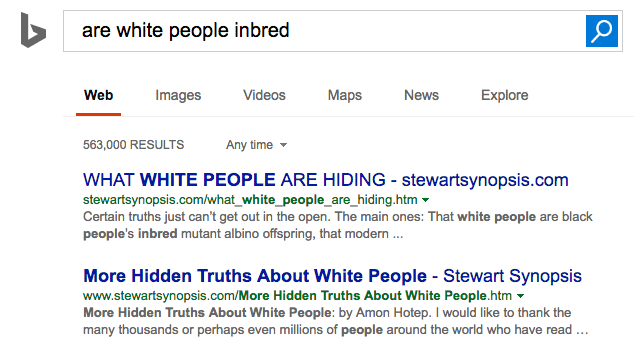 Instead, what explains both of the examples above is what I’ve been saying: search is hard. That’s not as clickbaity as dashing out a fast article that Google (and solely Google) has horrible results for whatever will be the hot topic of the day. But that’s the situation as I see it, as a 20-year veteran of covering the search space.

Dealing with the rise of fake news and the post-truth world isn’t easy. It’s not going to be a fast fix. I think Bing’s done a better job than Google in the examples raised, but both have issues. Both will continue to have issues especially when cherry-picking infrequent queries. But I hope both really do find substantial ways to make change in the weeks and months to come.

And about that profiteering accusation

Also, on a sidenote, you may have read me in the Guardian saying that Google has been surfacing these problematic results just to make money:

The first paragraph is correct, citing an article I wrote (though not linking to it, instead linking to the Search Engine Land home page).

The second paragraph is false. It is not what I said. And it’s becoming downright annoying because people keep assuming I did say that, wasting my time responding to emails and tweets about it to set the record straight.

I didn’t say Google changed its algorithm to reward popular sites over authoritative ones. That was a misinterpretation of an explanation I wrote about how Google might be using clickthrough more heavily, as some suspect. Even if Google is actually doing this, that would simply trade one popularity metric it has used, links, for another, clicks.

If you want to understand this better, please read my last article on this topic, where I cover the issue in more depth.

In addition, I didn’t say that Google made any specific change involving problematic searches to make more money, which is the impression plenty of people are getting from how that’s written.

And yes, I’ve asked several times for that last paragraph to be corrected or clarified since it first appeared. I’m still waiting.

Everything Google does is meant to make it more money — even when it doesn’t show ads, because it hopes in some cases not showing ads might make ads elsewhere more effective.

But the idea that Google — cofounded by two people with Jewish heritage — is deliberately pushing a Holocaust-denial site to the top of its results to make money? Come on.

The Guardian’s latest article even tries to prove this by showing how Google is “profiting” from ads run by a Jewish heritage museum to bump the denial-site off the top results.

It’s horrible that Google had the denial site showing up tops for “did the holocaust happen.” It has serious work to clean-up many of its results. It deserves to remain under the spotlight as it grapples with this problem. It deserves to face criticism if it claims a fix that doesn’t work as advertised.

But everyone deserves for the issue to be covered without stretching the truth, especially ironic when we’re talking about improve the truth in results.