How Marketing Like Netflix Will Save Your Lead-Gen Strategy

Posted on: December 9, 2016 by Local SEO Nerd in Local SEO Strategies
No Comments

Webinars are an incredibly popular lead-gen tool in most marketers’ toolkits. However, times have changed (and viewer attention spans have changed with it). Rather than try and force your audience to show up on time for live events and stay for a full hour (ain’t nobody got time for that), it’s time to consider delivering content they can watch anytime they want (just like their Netflix experience). We’re talking on-demand video.

Now I know “on-demand” is an all-the-rage word as of late, but I really mean it. When is the last time you showed up for a live event or watched a television show on time? Can you even remember? I can’t. (Except for that time I bought expensive tickets to Wicked.) Now you can bet I’m showing up on time for that, because I paid for it. But if it’s free, my pulled-in-one-million-directions brain is going to forgo the things that aren’t urgent (or costly) – which means all those webinars I signed up for are lost conversions for the marketers who run them.

By thinking and delivering on-demand content like Netflix, the power is put in the hands of your audience to consume on their time – giving the audience edu-taining content to watch when they feel like it and giving us the ability to collect more leads and product sign ups than demanding live events.

Now as a marketer at Unbounce, I also realize that webinars are a very powerful and well-used channel. Webinars were our bread and butter for a long time, as they are for many other marketing teams, but the shift in attention spans and the way marketers consume content (both professionally and personally) means that we tried to adapt our video content with it and saw great results when we launched The Landing Page Sessions in 2015.

We bounced around the idea of producing pre-recorded videos for our audience, which we saw as having a few benefits over webinars:

After all was said and done, this one series with 12 episodes has become an ongoing source of leads for us and brought in 87% more product signups than our webinars over the course of four months. Can I get a “heck yeah!”?!

The Landing Page Sessions was built with the goal of showcasing our product, Unbounce, in a way that was valuable to viewers and great for explaining the use of landing pages. During each episode of LPS, Unbounce co-founder Oli Gardner breaks down a full marketing campaign from start to finish and all the videos live on their own microsite where they can be accessed all day, every day. 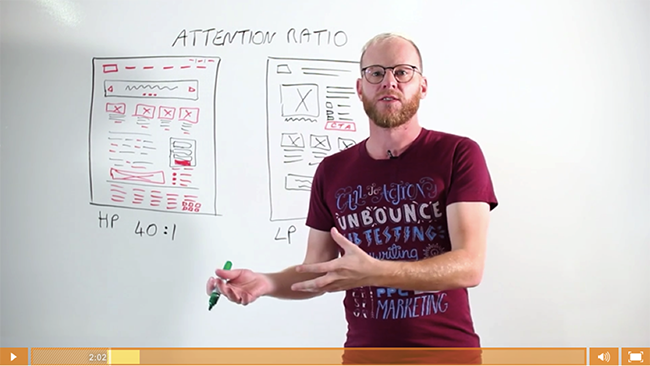 This is a big change from traditional webinars which, as you probably know, include registering for a live event that largely entails 1–3 people chatting over a slide deck for about 30–45 minutes. Not exactly entertaining, but some companies pull them off really well. The problem for us was that while our webinars were well-produced, they had a declining registration rate and, subsequently, attendance rate. As you can imagine, this also lead to a declining amount of leads and product sign ups. The shift to on-demand content was intimidating, but we were pleasantly surprised. There is more work up front with pre-recorded content, but then it lives forever and you can drive as much or as little traffic to it as you want. Let’s break down some of the key benefits of using on-demand content over webinars.

1. Avoid technical snafus that go into running a live event.

A big win from switching over to on-demand content is that we avoid the technical snafus that can often happen in live content. With pre-recorded content you don’t have to worry about GoToWebinar going down, mics going amiss, ill-fitting slides, or power outages.

I used to run webinars at Unbounce when I first started, and I can’t tell you how many near-heart attacks I almost had because of the technical glitches with live events. Ain’t nobody got time for that.

We used pre-recorded video hosted with Wistia, and aside from avoiding live technical glitches, we were also able to optimize our video as we saw fit without the pressure of only getting one go at it. We would adjust our turnstiles and call-to-actions based on real-time stats, like average watch time and which of the episodes were most frequently clicked on.

And speaking of optimization, on-demand video also gives you the ability to create a ton of opportunity for conversions that’s otherwise pretty limited with live events (because you only capture when you collect registrations). There are sometimes opportunities post-webinar, but at Unbounce we’ve seen a pattern emerge: most people don’t convert after watching. They often sign up to get the recording but don’t end up watching that either, so whatever post-work you do can often be fruitless. Bummer.

With LPS we capture leads through many different avenues, including:

These were all things we couldn’t have done (or done very well) with live shows before, because there just wasn’t room. And if we were putting all this effort into running a show, why shouldn’t we see a good return on it?

Now, with all this space for opportunity to convert, you still have to be careful you’re not being a marketing jerk. It’s easy to overwhelm the viewer, and we experienced that first hand because we were a little “conversion-happy.” Remember that there are people on the other end trying to watch your awesome content, so try and place your calls-to-action strategically so they aren’t overwhelmed, and then subsequently bounce. So play it cool, folks, but take advantage of all the room for activities!

3. Create content with higher production value (even if the costs are relatively the same!) that people want to watch

And finally, your production value can be a lot higher (even with a budget that’s the same as what you were running webinars with). 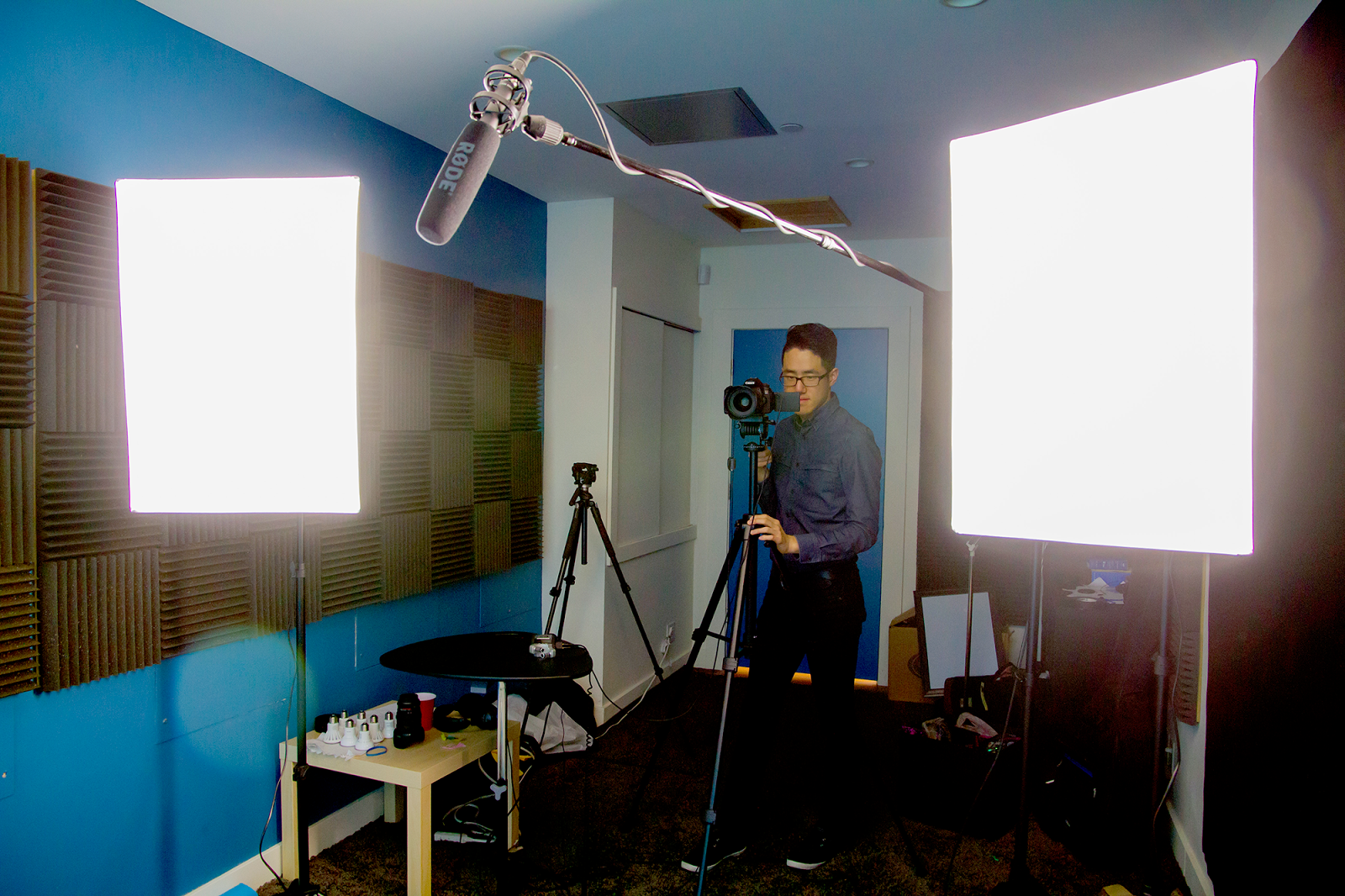 Here are a few takeaways about how to build your own high-quality, on-demand production without it feeling daunting:

The draw of webinars are not after they’ve happened, it’s during (as much as we’d like to believe our webinar recordings provide a ton of value, the fact of the matter is that they often don’t). Take what you know people like about those webinars and build that into your pre-recorded productions! If you’ve run a webinar, for example, where people really liked when a guest dissected email copy, create a short series around that topic.

Listen to your audience and ask them questions about what they’d like to see, then do it. Crowdsourcing is definitely underutilized, and sometimes as marketers we can over-complicate a situation. The easiest thing to do when deciding on new marketing channels is to ask the opinion of those who already love you. I learned this when I sent an email last year just asking “What do you need to get more out of landing pages?”, rather than assuming I knew what everyone’s issue or need was. And the result? I found myself a little surprised by some of the answers, and I was able to craft that into some stories for the show.

Create a production schedule and stick to it. Nothing is worse than putting more effort in than necessary for little to no return (this is the danger of on-demand content, and I get asked this a lot: “When are you done?”). Giving yourself a schedule allows you to build better productions without perfecting them until the end of time. For the landing page sessions, it took us about 3–4 months to build, promote, and release the season, for example.

And finally, a pro-tip: If you’ve got something to show off, do it! Showcase your product! Pre-recorded video is a great way to do that without having the pressure of a live demo.

All this means that you can get more conversions with on-demand video because it puts the user first. On-demand video lets the consumer watch what they want and when they want – and that’s the whole point, folks. People who watch on their own time are more likely to convert because they’ve taken a vested interest in seeking out (or saving your content) to watch at a time that suits them best. This means they’re already in a position to find more value in what you’re serving up, and reduce friction to converting. So you can create a high-quality production that takes the stress out of those live events and serves up highly relevant calls-to-action for highly motivated watchers. A match made in marketing heaven!

Wanna know a little more about our results?

Compared to Unbounce webinars that were run over the same four months that The Landing Page Sessions was running, the landing page sessions had 41 more product sign-ups than the approximate 4 webinars we ran at the same time (47 product sign ups vs. 88 product sign ups). The Landing Page Sessions also brought in close to 2500 leads in that four months as well (which blew what webinars would usually bring in out of the water). Initial effort was higher for LPS, so that needs to be taken into account, but webinars are not consistent in their results month-to-month, either.

This really highlighted a point that Wistia preaches – people like to watch a video before they buy a product. We showcased Unbounce and made it clear how landing pages can be valuable for anyone’s marketing campaigns by breaking them down and seeing how all the pieces drive to them for optimal conversions. 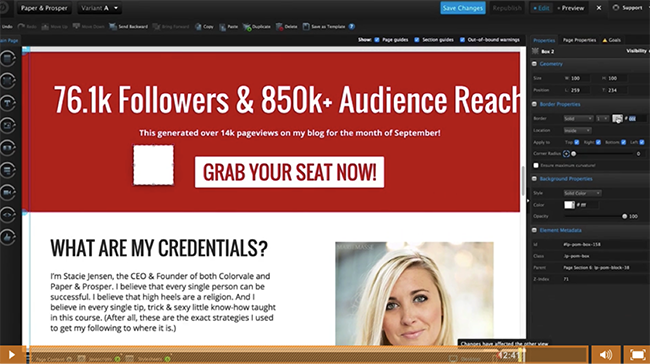 My learning: Running continual seasons of LPS (now that we’re off the ground) will be more valuable and less effort in the long run than running monthly webinars, based on the combined effort and return on investment.

Additionally, because this content is pre-recorded, we have a ton of ability to milk it for all it’s worth and give it life even months after it’s debuted.

On-demand content can live forever. This means you can continue to drive conversions much longer than a traditional live production recording. The conversion opportunities aren’t limited just to where you can add more, but the time period in which you find them!

Things we’ve tried to do with LPS that you can try too include:

And don’t forget to keep an eye on it! If you notice that there are opportunities for improvement with what you’ve got right now, test them out. There’s an ease for testing with on-demand content because you aren’t pressured by a live time box. Things we’ve tried with LPS include gating specific high-traffic episodes, driving more traffic to a high-performing episode through specific paid channels that have done really well, and using The Landing Page Sessions as a nurture tactic for nurturing our subscribers into qualified leads.

So when’s the next episode? 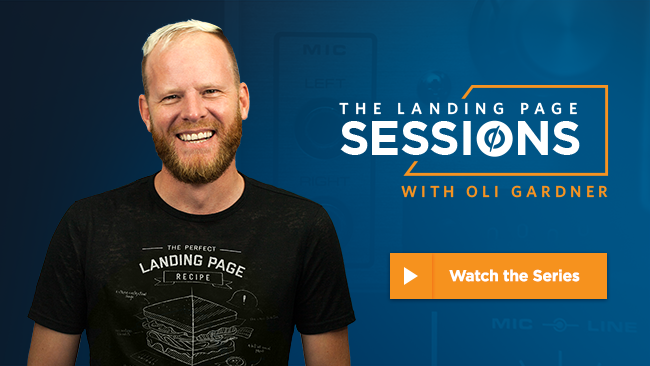 We are going to be working on a season 2 this quarter and are experimenting with things like:

So remember, don’t be afraid of trying out on-demand content in a webinar-soaked world. It can actually generate some long-lasting conversion channels with a higher production value and less effort. If you’re interested in doing some on-demand content, take a gander at what we put together at unbounce.com/lp-sessions.

Take a page out of Netflix’s playbook and provide your users with timely content they can consume at their leisure, and watch the relationship bloom between your audience and your product. Now is the time to binge watch everything from cat videos on Youtube to your favorite marketing Podcasts, so don’t wait for anybody to register to give them what they need.