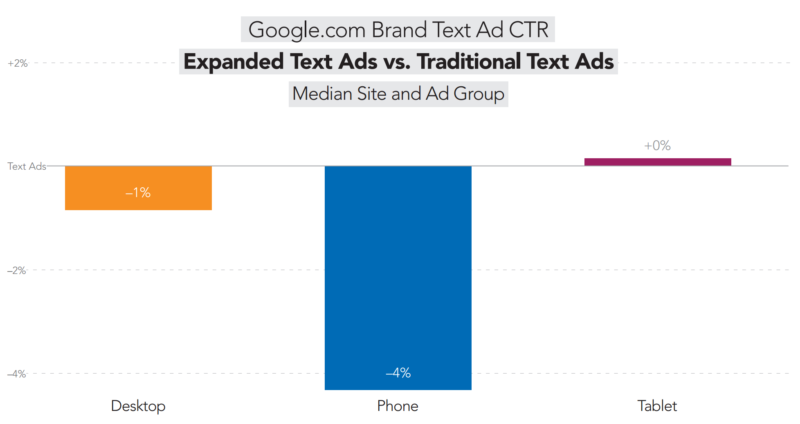 Merkle points out a few caveats when looking at this data. Little is known about the auction conditions for ETAs, such as how many expanded text ads display on a results page, how often product listing ads showed with expanded text ads and whether there is a difference in the queries that trigger ETAs versus standard ads during this period when both ad formats are running simultaneously. Another thing to note is that the frequency and mix of extensions that show with ads can vary significantly with each impression.

ETAs were receiving 47 percent of total impressions in the ad groups in which they were included, Merkle reported. Merkle’s client base skews large retailer.

These are early results, and more analysis will be forthcoming, as ETAs are now available to all advertisers, but they raise questions about the testing environment advertisers are supposed to be making decisions in over the next couple of months, as well as the long-term upside of ETAs. Google has said the key impetus for the new longer format was the idea that giving mobile users more information up front will give them more confidence to click. With that, it’s surprising to see these phone CTR results and to see desktop outperform phone.

It’s also worth pointing out that distinct mobile (preferred) ad copy is not supported with expanded text ads, meaning the same messaging is served across all devices.

The full Digital Marketing Report includes more on paid and organic search, comparison shopping engines and display and is available for download (with registration).