Should You Implement That New Google Feature?

Posted on: September 20, 2016 by Local SEO Nerd in Local SEO Strategies
No Comments 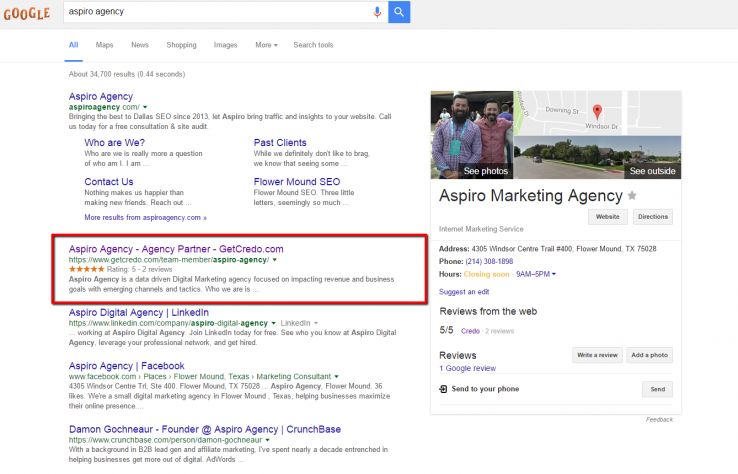 I remember when I first started in SEO back in 2010 full-time. It feels like forever ago and yesterday at the same time.

I was constantly plugged into the SEO Twitter firehose of information. I subscribed to the popular SEO blogs of the day, soaking up information about SEO that wasn’t even relevant to my day job at the time building links. While I read plenty of content about link acquisition, I also went deep into the geeky sides of technical SEO because it appealed to my web developer background.

Every week or two, Google was announcing something new. Some new feature, some new snippet, some new ad type, some new way of getting your pages/sites indexed faster and making them stand out from the crowd.

I remember SMX 2012 in New York City where I sat in on a session where now-former Mozzer Matt Brown spoke on Schema.org and counseled all of us to hop on the Schema bandwagon because it was the future of search. You can see that presentation here and I’ll reference it a few times in this post.

Five years later, I can look back and say, “Yes, they were right. Schema has stuck around and proven to be a stronger and stronger part of search algorithms and you should learn it and implement it, if you haven’t already.” 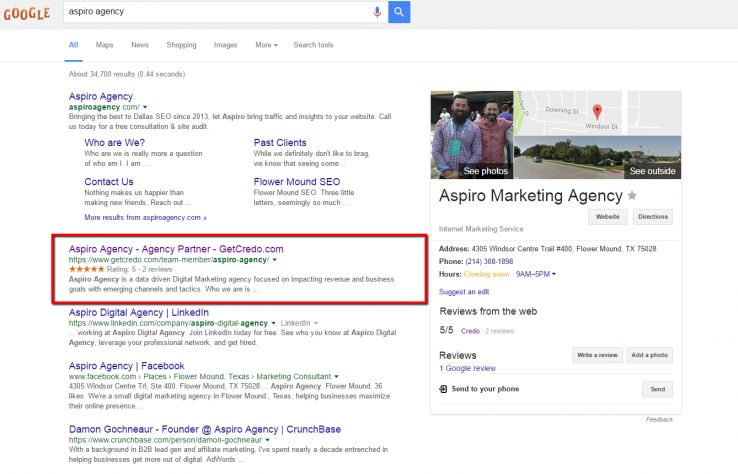 It works and we know that now in 2016, but back in 2012 it was new and took a lot of effort to implement. And so many people simply didn’t.

So how can you, as either a small business owner dabbling in SEO (while also doing all the things as the owner) or a professional SEO/digital marketer, know when you should implement something that’s brand-new, or whether you should wait on it until you have more data?

Is there a history of it?

Google is almost twenty years old, if you can believe that. They’ve been around a long time, built a huge business, and changed the way the world’s information is organized, found, and consumed. Google is a once-in-a-lifetime company, and I say that as someone with a love/hate relationship with them (alongside many other SEOs/digital marketers).

In spite of their growth and current size, their mission has always been the same:

Google’s mission is to organize the world’s information and make it universally accessible and useful.
– Source

This is at Google’s core.

Google has moved into other areas, such as social, but haven’t seen great success because they’re better at organizing content than creating it. Check out this from Matthew Brown’s talk: 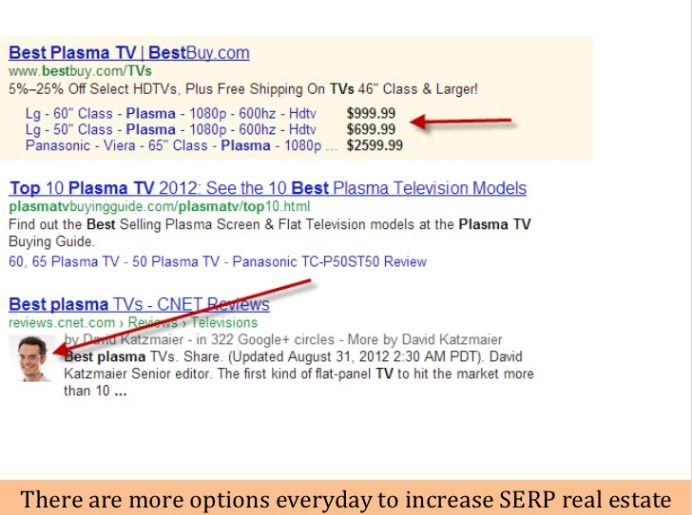 The Authorship program was killed in 2014 (post here on SEL), though the idea behind it (identifying who wrote what and where online) lives on to help Google organize the world’s information better.

This is a great example of something that everyone said you *should* do (and maybe short-term helped with clickthrough rates), but which Google eventually killed because it was a new initiative. You would have been much better served to spend your time writing around the Internet and marketing your company than just trying to get an image in the SERPs.

Are others already implementing it?

I hate the United States culture of consumerism and keeping up with the Joneses. Why do we feel the need to spend money that we don’t have to buy things we don’t want to impress people we don’t really like (paraphrase from here)?

The same thing happens in digital marketing. If we see someone implementing something, we should rightly ask “Why are they doing that?”, then make our own decisions.

The interesting thing — just like with impressing our neighbors — is that sometimes (but not always) they will have the inside line on something great that a) you can afford (aka get done for your company) and b) is in line with your personal strategy and values (aka you’re true to yourself).

HTTPS is one such example. If you’re a business with customers (which all of you are, because how do you make money without customers? If you can, I’d like to speak with you), then you care about them and want them to be safe and happy. While HTTPS takes time to deploy on large websites, and can have very real challenges as Wired is learning the hard way, on smaller sites it can be much simpler and can be implemented more quickly. You may not see a bump in rankings, traffic, or revenue right away, but you can be sure that HTTPS is something Google wants to and is beginning to reward.

Finally, if you see something rolled out and not many people are implementing it, ask why. If it’s because it’s difficult technically but you can get it done fast and it’s true to your strategy, then get it done — it’ll help you get ahead of the pack. If it requires a huge undertaking, however, take your time and wait until the barrier to entry is lower or until the search engines finally start making good on their promises.

Is it a continuation or a new initiative for Google?

Earlier I mentioned Google’s core mission of organizing the world’s information. This is why Google was initially created, and it’s what they still do incredibly well. Over time, they’ve (finally) taken the user into account and realized that offering a great user experience benefits their bottom line. User experience (and design!) has become part of their core.

There are a few things that Google is terrible at, such as social or content. They’re also terrible at launching software that works really well and can displace incumbents. Google Flights is great, but online travel agencies (OTAs) like Expedia are still winning, even as Google puts themselves above the organic results.

That’s just one example. If it’s a brand-new initiative that Google has not previously gone after, be very suspicious. I like the “hurry up and wait” approach here — hurry up to learn all that you can about it, but wait on implementing it, especially if you’re a small company with a million things to do already. Stay true to your strategy.

If it’s a continuation of something they’ve already been doing and received traction on, then you should take more notice and seriously consider how you can implement it for your company.

Take, for example, the recent rollout of AMP (Accelerated Mobile Pages), which essentially allows Google to display a cached version of your page to mobile users so that it loads quickly and makes users happy(er). 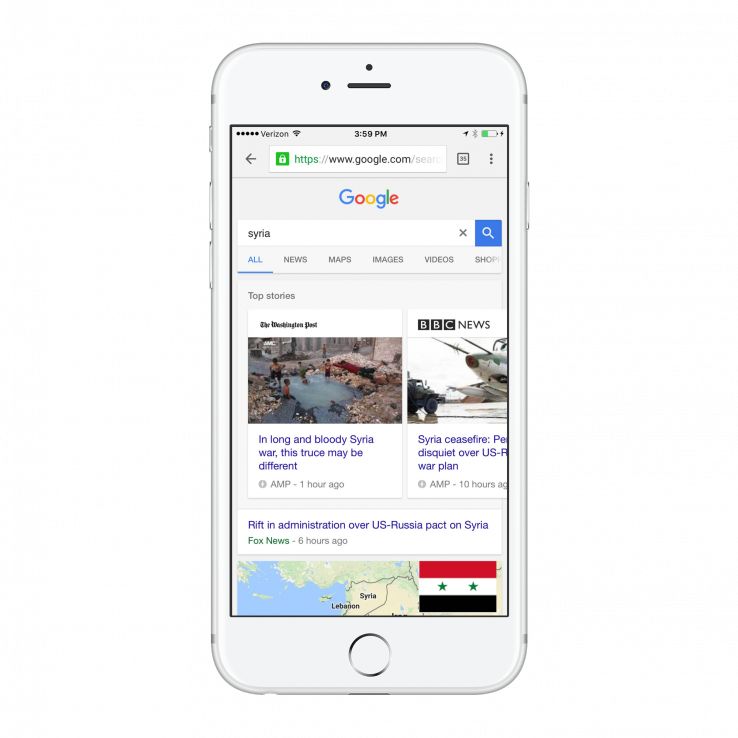 Google has said for years that they want above-the-fold content on mobile sites to load in under one second. AMP is a continuation of something they’ve been conveying for quite a while, a promised initiative they’re finally making good on. Within mobile search results, we now see how sites that load quickly tend to rank better than they otherwise would. I’ve witnessed this firsthand on some of the sites I’ve touched — when engineers care about speed, your site makes both search engines and users very happy.

Is it passive or active?

Sometimes Google creates new initiatives within search that require no implementation on your end. They run tests all the time (SERPtests is a great resource from Conrad O’Connell) that affect the way your site shows up.

Don’t assume that just because they’ve changed something that it’s in your best interest. Google is a business and they exist to make themselves money, not you.

As an SEO, you are not Google’s friend.

So, once again, we hurry up to learn and then decide whether we should take action (adjust your meta descriptions, add Schema, etc.) or just sit back and let the data accumulate to inform better decisions. The answer will always be different depending on your business, and I can’t tell you whether you’ll benefit from specific changes or not. But you’re empowered to make that decision.

If a new feature requires active development from your end, take the time to figure out why Google’s made the change, what it might mean for the future, and how much work it’s going to take to achieve the expected outcome. If you’re a consultant and not helping your clients prioritize their work based off the predicted impact and the amount of effort, you’re not doing your job. And if you’re an in-house SEO in this boat, same message: you’re not doing your job.

Does it fit with your current SEO strategy?

I’ve touched on this point a few times, but I consider it so important that it merits its own section.

An SEO strategy should be set, to a degree. You should know what your business needs to do in order to rank and drive the business results needed from organic search. However, your strategy should not be so set that you’re unable to implement new things that are both true to your business and will move that metrics needle.

Know where you’re going with your strategy and what your metrics are. By having those goals in mind and by putting in place processes that allow you to grow passively, you can confidently say “yes” or “no” to new features that may move the needle or may be a distraction.

What about first-mover advantage?

Now, I know there are a lot of people who believe that being a first mover is a great thing. And when you’re launching a new business, this mindset is incredibly pervasive. Everyone wants to “find the niche where no one is and be there to be the first mover.”

The problem is that first mover advantage doesn’t always exist. From a Harvard Business Review article:

First-mover status can confer advantages, but it does not do so categorically. Much depends on the circumstances.

I don’t really believe in first-mover advantage, and as an entrepreneur, going into a completely new realm where no one else has gone before feels too risky to me. I’d rather take my time to learn from others who are trying to do something similar, figure out the unique angle on the business (whether the vertical or the business model), and then build something that users really want. This is called being wise (listening to others) not just smart (figuring it all out on your own).

SEO is a constantly shifting industry. We’re built on the back of a computer algorithm, after all. Because of this, things will change constantly and all digital marketers need to develop a rubric through which you can decide whether a new feature or opportunity is worth your time, effort, and change of strategy long-term.