Posted on: September 8, 2016 by Local SEO Nerd in Local SEO Strategies
No Comments

Quality and relevance are different things, yet we often discuss them as if they were the same. SEOs have been optimizing for relevance all this time, but are now being asked to optimize for quality. This post will discuss what that means and how to do it, with a focus on what I believe to be the single most effective and scaleable tactic for improving your site’s overall level of quality in most situations. 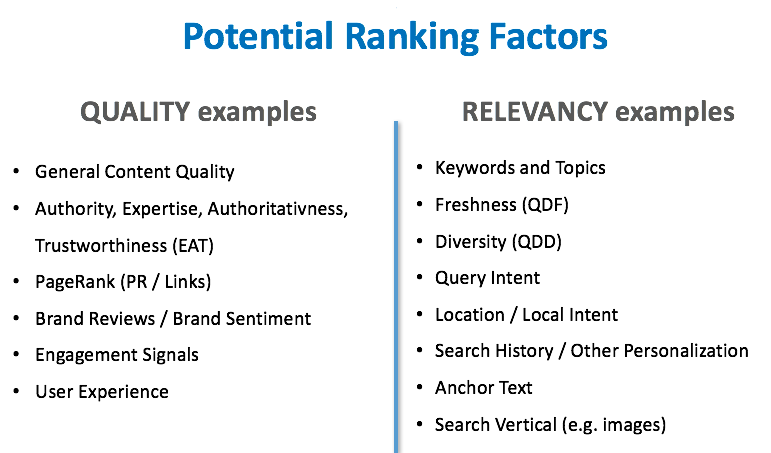 You need BOTH quality AND relevance to compete these days.

First, let’s establish what we’re talking about here, which is quality. You can have relevancy (the right topic and keywords) without quality, as shown here: 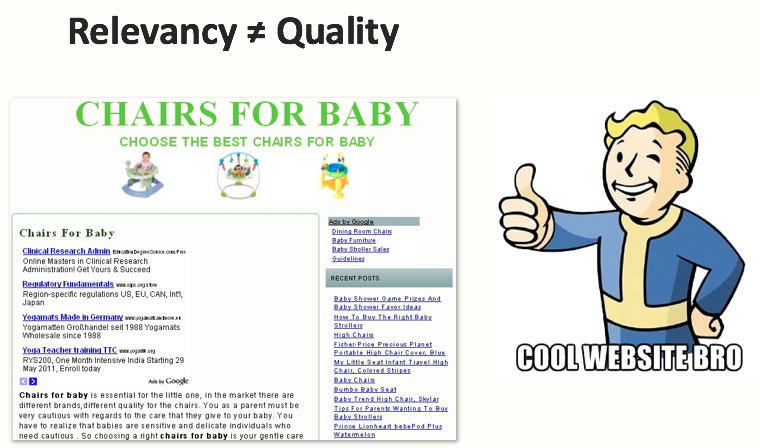 This MFA site is highly relevant for the phrase “Chairs for Baby.” But it also sucks.

“…babies are sensitive, delicate individuals who need cautious. So choosing a right Chairs For Baby is your gentle care.” WTF?

It doesn’t matter how relevant the page is. The only way to get that page to rank these days would be to buy a lot of links, but then you’re dealing with the added risk. After a certain point, it’s just EASIER to build a better site. Yes, Google has won that battle in all but the most hyper-competitive niches, where seasoned experts still find the reward:risk ratio in their favor. 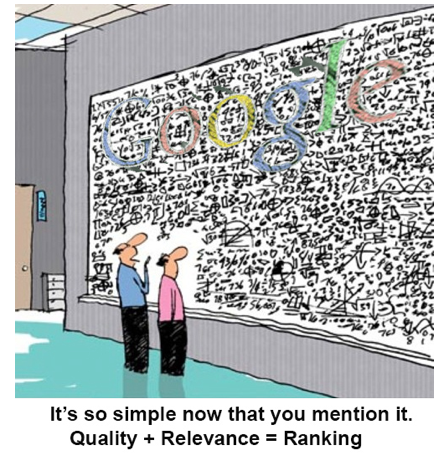 OK, now that we’ve established that quality and relevance are different things, but that you need both to rank, how do you optimize for quality?

There are many ways to improve the quality of your site. Some are obvious. Others are more abstract. All of these quality indicators together make up your site’s overall level of quality. For more, check out the keyword agnostic ranking factors and the engagement metrics from SimilarWeb areas in the Moz Search Engine Ranking Factors report.

What’s the most effective, scalable, proven tactic for improving a website’s QR?

In a word: Pruning.

Learn more about it here. Pruning requires doing a content audit first, which you can learn more about here. It’s nothing groundbreaking or new, but few clients come in the door that can’t substantially benefit from this process.

Sometimes pruning is as easy as applying a noindex tag to all pages that have had zero organic search traffic over the course of a year. You may be surprised how many enterprise-level sites have huge chunks of the site that fit that criteria. Other times it requires more analysis and tougher decisions. It really all depends on the site.

So let’s look at some pruning case studies.

1. Significant portions of the sites were removed from Google’s index.

2. Pruning was not the only thing that was done. Rarely do these things happen in a vacuum, but evidence points to pruning as a major contributor to the growth examples you’re about to see.

3. You can read more about Inflow’s research in our case studies section. 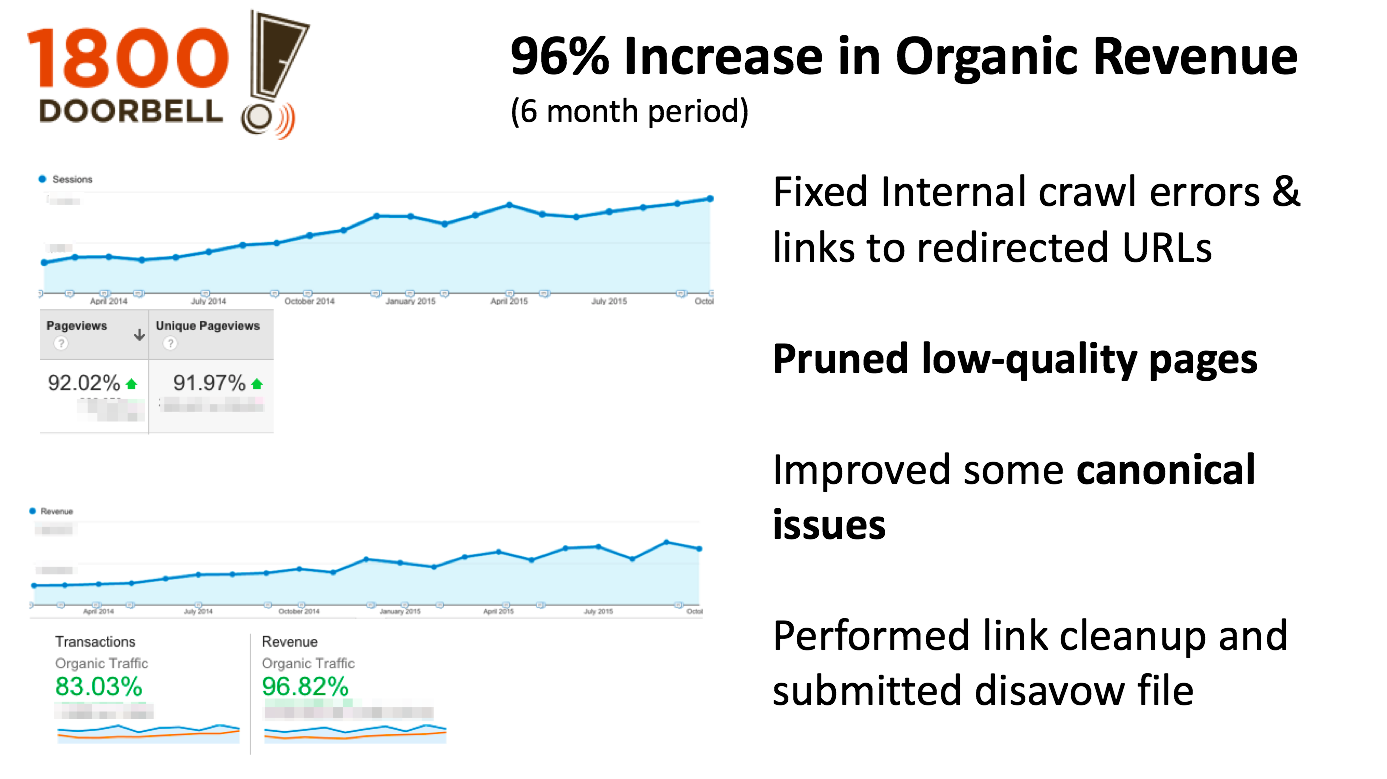 1800doorbell had technical issues that made it possible to identify cruft and prune big chunks of the site quickly. This contributed to a 96% increase in revenue from organic search within six months. 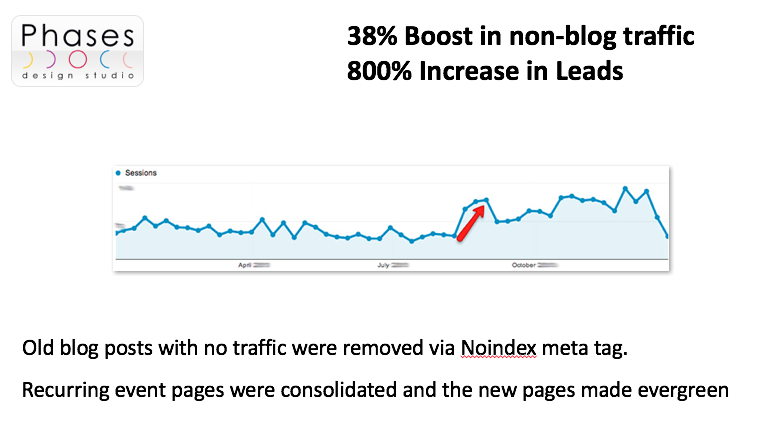 The dip at the end has to do with how the timeline was generated in GA. Growth was sustained.

We’re not the only ones finding success with this. Go check out the Ahrefs case study for another example. Here’s a compelling image from their case study:

Ahrefs saw amazing results after performing a content audit and pruning their blog.

If you weren’t already convinced, I hope by now it’s clear that performing a content audit to determine which pages should be improved and which should be pruned from Google’s index is an effective and scalable SEO tactic. That being established, let’s talk about why this might be. 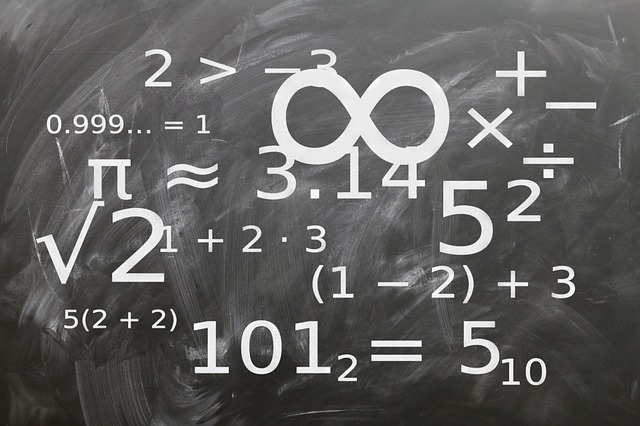 We don’t know exactly how Google’s ranking algorithms work. But it seems likely that there is a score for a site’s overall level of quality.

Does QualityRank actually exist as a calculation in Google’s organic algorithm? Probably not under that name and not in this simplistic form. But it DOES seem likely that something similar would exist, especially since it exists for PPC. The problem I have with the PPC equivalent is that it includes relevance factors like keyword use in their metric for “quality.”

Google needs a way to measure the overall quality level of each site in order to rank them properly. It’s just probably much more mathematically complicated than what we’re talking about here.

The point of discussing QualityRank as a framework for pruning is to help explain why pruning works. And to do that, we don’t need to understand the complex formulas behind Google’s ranking algorithms. I doubt half of the engineers there know what’s going on these days, anyway.

Let’s imagine a site divided into thirds, with each third being assigned a QualityRank (QR) score based on the average QR of the pages within that section.

The triangle below represents all indexable content on a domain with a QR of 30. That sitewide QR score of 30 comes from adding all three of these sections together and dividing by three. In the real world, this would not be so simple. 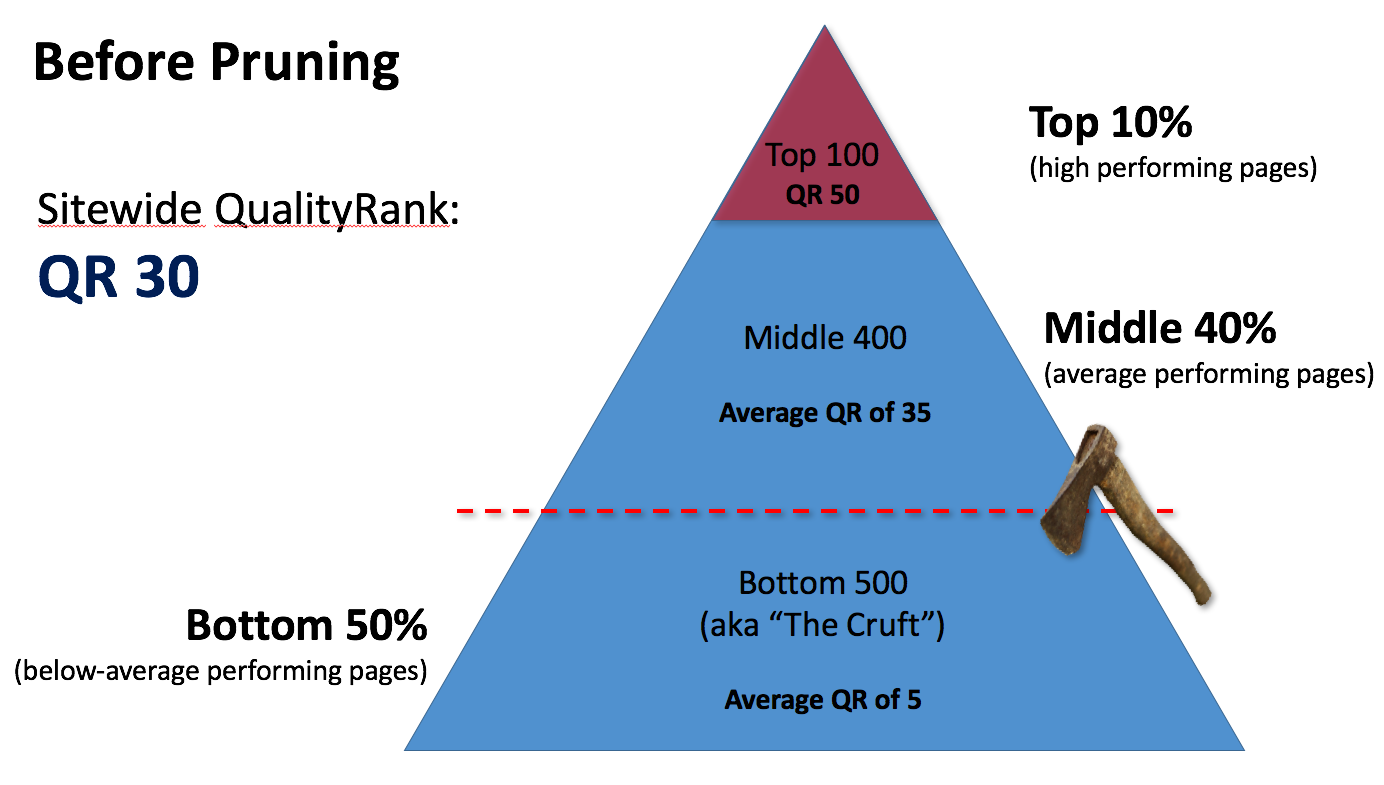 I hope the mathematicians out there will grant me some leeway for the sake of illustrating the concept.

This is the same site after removing the bottom 50 percent from the index: 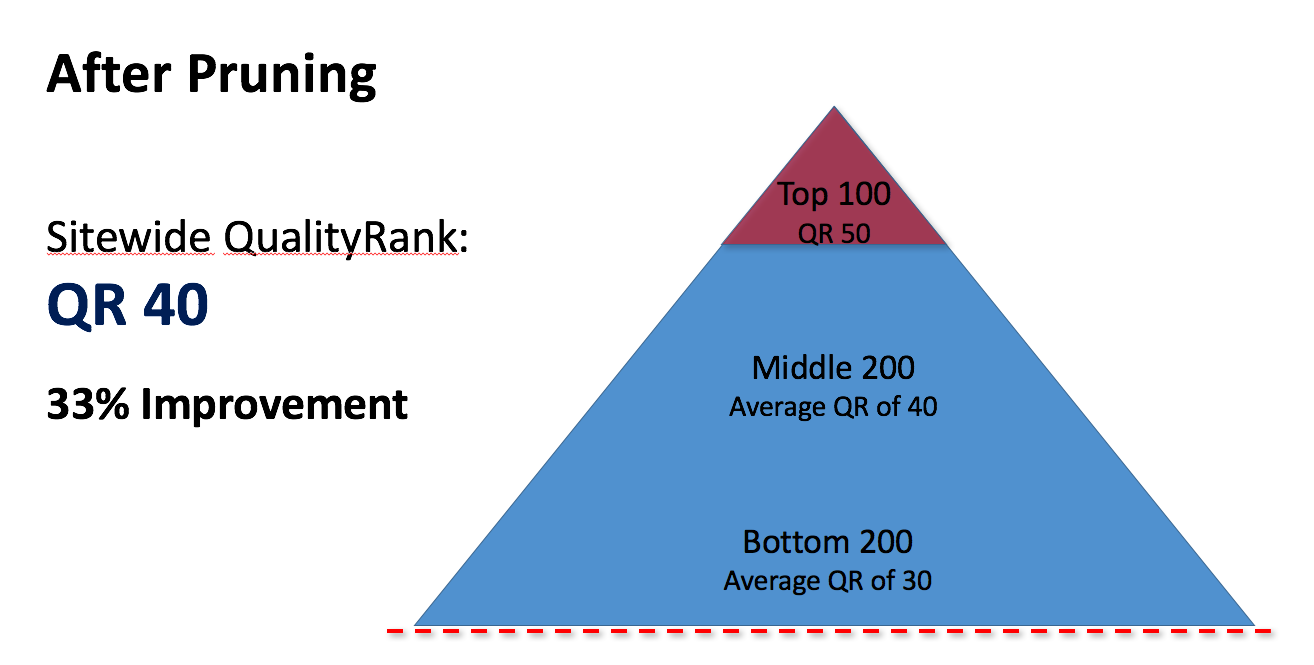 Notice the instant lift from QR 30 to QR 40 just by removing all LOW QR pages. That is why I say pruning is the most effective way to raise your site’s overall quality level for better rankings, IF you have a lot of low-quality pages indexed, which most sites do.

Pruning works because it frees up the rest of your content from being weighed down by the cruft.

“Cruft” includes everything from a 6-year-old blog post about the company holiday party to 20 different variants with their own landing pages for every product. It also includes pages that are inadvertently indexed for technical reasons, like faceted navigation URLs. 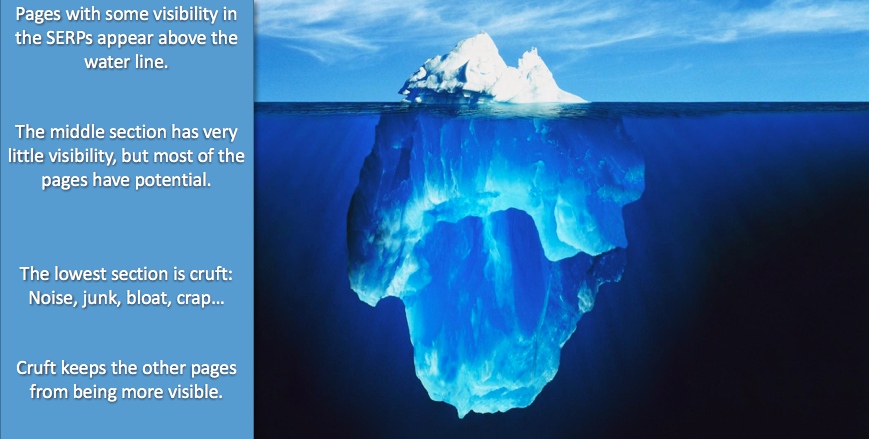 Remove the bottom half of this iceberg and the rest of it will “rise up,” making more of it visible above the surface (i.e. on the first 2–3 pages of Google). 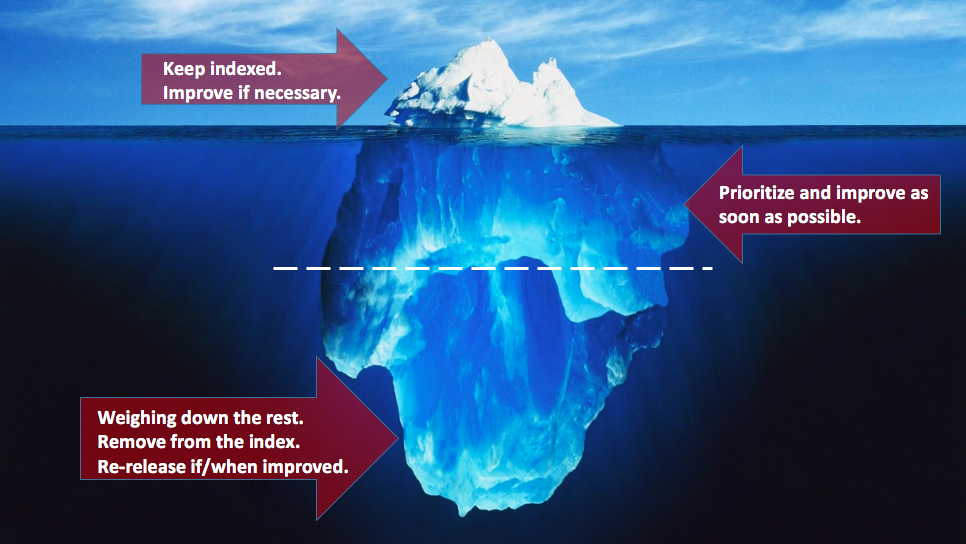 The idea of one page being weighed down by another has been around at least since the first Panda release. I’m not writing about anything new here, as evidenced by the many resources below. But I’m constantly surprised by the amount of dead weight most websites continue to carry around, and hope that this post motivates folks to finally get rid of some of it. Your choices are many: 404, 301, rel =”canonical”, noindex, disallow… Some of the resources below will help you decide which solutions to use for your unique situation.